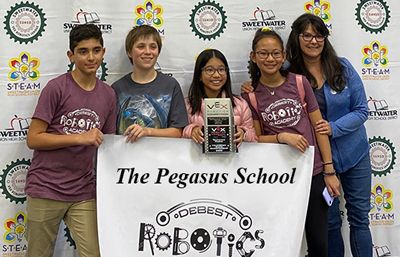 4/19/2020
The Pegasus Robotics team of Caden B., Isabella L., Jason H. and Lauren Y. competed in the virtual 2020 VEX Robotics World Championship on April 25 and ranked #44 out of the top 360 middle school teams in the world!
This team placed as a finalist in the 2020 California VEX State Championship, held in San Diego on March 8. Also, the Robotics team of Jacob L., Finn J. and Lance Y. received the Judges Award at the California Championship.

More than 20,000 teams from 50 countries competed in the VEX Robotics Competition this year.  California has 8,000 teams that compete throughout the year for 300 spots in the California VEX State Championship, making California the most competitive state in the U.S. This year, Pegasus had six teams advance to this tournament.
Back